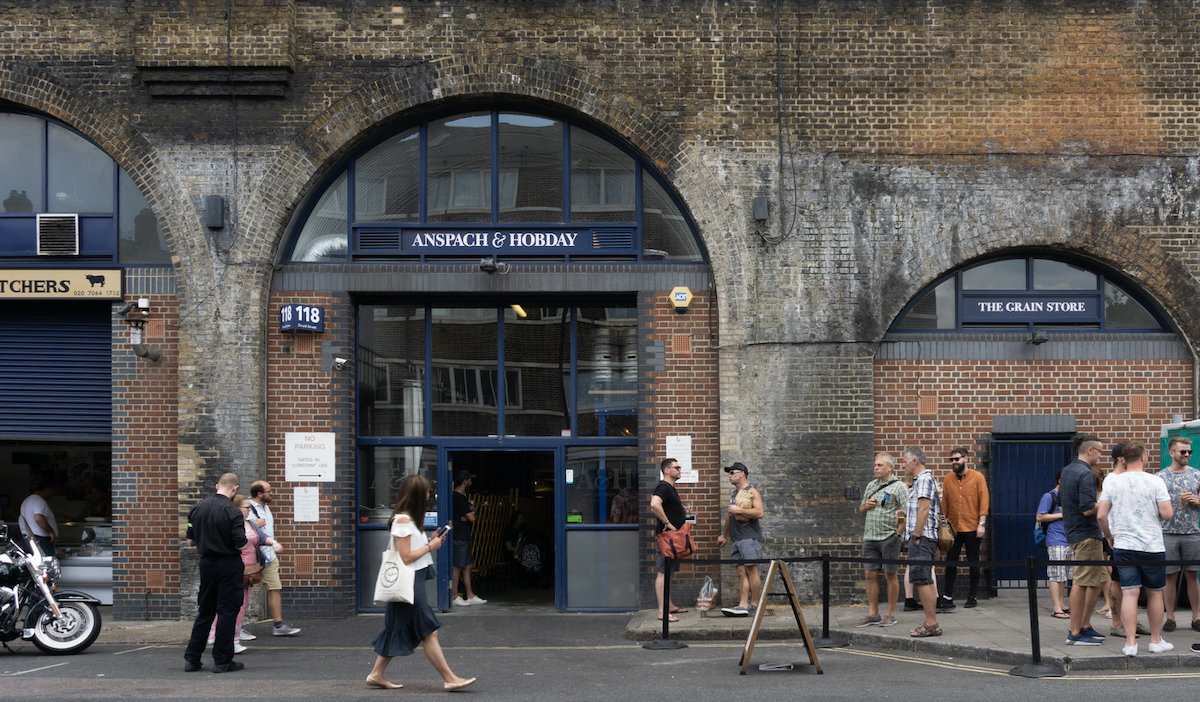 The Bermondsey Beer Mile is a stretch of artisan breweries and taprooms spanning almost a-mile-and-a-half of streets and railway arches in South London. The Mile’s origins can be traced back to 2009 with the opening of the first brewery, The Kernel, and today around 15 beer-centric venues are proud to call Bermondsey – and its eponymous ‘Beer Mile’ – home.

The beating heart of London’s craft beer scene, Bermondsey’s abundance of trendy breweries and taprooms makes the Mile the perfect quest for beer lovers. Expect small batch, pioneer brews from lemongrass saisons to honey IPAs, plus plenty of flagship blends that have made their way from Bermondsey to bars across the capital, all crafted and served onsite by fellow beer enthusiasts.

The best place to start is Maltby Street Market, a short walk from London Bridge station, where beer lovers can sample some of London’s best street food to line their stomachs before embarking on their hoppy odyssey. The Mile can also be undertaken in reverse, from east to west, with the first stop, Fourpure Brewing Co, easily accessible from South Bermondsey railway station and Surrey Quays overground tube station. Old Jamaica Business Estate, handily located midway through the Mile, makes an ideal stopping point for food with a choice of eateries akin in style to Bermondsey’s taprooms.

Breweries and taprooms currently on the Bermondsey Beer Mile

A short walk from Maltby Street Market, Southwark Brewing Company makes a convenient first stop on the Beer Mile. It boasts a range of traditionally brewed, small batch beers, including the Mile’s namesake English best bitter, Bermondsey Best. Enjoy your first pint of the day in the industrially chic taproom – plus, the brewery welcomes you to bring in food from the market to eat whilst sampling their produce.

The Barrel Project, owned by London Beer Factory, offers a selection of barrel-aged wild ales and craft beers across 24 taps. Its railway arch is lined with 200 oak barrels for aging and contains an emerald-tiled bar, plenty of seating and an in-house kitchen that hosts local pop-up food companies.

Housed in four railway arches on Druid Street, Hawkes Cidery and Taproom boasts a range of their flagship Urban Orchard, Hawkes Ginger Beer and craft ciders made onsite, plus BrewDog beers if you want to commit fully to the Beer Mile. Guided tours of the cidery, tasting sessions and cider-making masterclasses are offered too. Bask in the warmth of its trendy wooden interiors and sample the selection of fresh stone-baked pizzas.

At the end of the Maltby Street Market is Hiver, who brew and ferment their beer with raw honey. Expect fresh and natural beers across four taps – two keg, two cask – with brews such as their flagship blonde beer, the Hiver Blonde, as well as a range of their bottled offering in a warm, fairy light-adorned taproom.

Anspach and Hobday’s brewery and taproom offers nine beers on tap and a lively atmosphere. The railway arch is filled with beer tanks and long wooden benches, with additional seating space available now much of the brewing has moved to their larger premises in Croydon. Beers include experimental stouts, fruited sours and pale ales, all brewed exclusively with English hops.

Moor Beer marks the start of the Enid Street stretch of the Beer Mile and claims to be the ‘original vegan friendly beer’. Although their brewery is based in Bristol, they do have a large barrel store for aging at the rear of the premises. Moor Vaults’ core beers include a ‘rustic’ lager, session IPAs and ultra pale ales across 12 keg lines and three cask lines.

Current status: Temporarily Closed. Mini kegs and cans available via their online shop and for click and collect.‍

Next door to Moor Beer you’ll find London Calling Sweden, a taproom offering a range of ecological craft beer from Swedish microbrewery Poppels, plus a variety of Swedish cheese. Pale ale features heavily across their eight taps, with highlights including The New World IPA and Passion Pale Ale. Expect a bustling ambience complete with live music and beer tastings.

Cloudwater’s taproom boasts fresh releases and barrel aged beers from their Manchester brewery in some of the finest interiors of the Mile. The range of 20 draft taps favours DIPAs and high strength beers which are available in third pint measures – an ideal size if you’re planning to complete the full Mile.

Two doors down from Cloudwater is Brew By Numbers tasting room, which tenders new releases and pilot kit brews served directly from their cold store. Highlights of BBNo’s offering (all named with numbers) include hoppy saisons, dark coffee beers and their 05 Simcoe Summit IPA which was rated the ‘Best Beer in London’ by RateBeer in 2019.

Craft beer is brewed onsite at the final stop on Enid Street, Bianca Road. They recommend the Long Play IPA as ‘the one to start on’, a session pale with a hoppy hit and punchy flavour. The brewery welcomes you to bring food into the taproom – street food vendors can be found outside most weekends.

As the first brewery to open on the Mile, a serious Bermondsey beer tour is not complete without a visit to Kernel. Originally located on Druid Street, they now brew at their premises on Dockley Road and serve the fruits of their labours in a split-level taproom a few arches down. Sample the offering of pale ales, Kernel’s speciality, served largely as third or half pints due to their strength.

Spartan Brewery’s tiny taproom will be a welcome sight after the longest walk of the Mile – it’s almost a kilometre from The Kernel to Spartan’s premises on Almond Road. End your quarter-of-an-hour beer hiatus by sampling one of their speciality light, hoppy brews. Spartan claims that their ethos is perfectly encapsulated by their first commercial beer, a light mild, that can be served to you fresh from the conditioning tank in off-peak times.

The second taproom on the Almond Road stretch of the Mile, EeBria, is a distributor boasting an impressive collection of kegged and bottled beers from more than 450 breweries. Enjoy a brew of the day from the eight guest taps or their considerable bottled offering whilst basking in the artsy, wooden pallet-based interiors, or brave their urban beer garden if the weather allows.

Just around the corner from Almond Road is the penultimate stop on the Mile, Partizan Brewing, an airy, spacious taproom with plenty of seating and a large brewhouse at the rear. Core beers include rich and complex stouts, London classic porters and hoppy IPAs, with the promise of new experimental brews like Lemongrass and Lemon and Thyme Saisons. Brewery tours and tastings are also available.

With 43 taps, two stories of seating and brewing tanks as tall as the building, Fourpure is the largest brewery premises on the Mile by some margin – if you start from the Maltby Street Market end, you’ll have saved the biggest until last. Fourpure’s core range favourites include Basecamp Pils Lager, Juicebox Citrus IPA and Last Train Stout, but also expect a generous offering of their small batch, pioneer series brews. Resident food stand Oh My Dog! offers refreshments of the burger and hotdog variety.

Where is the Bermondsey Beer Mile?

The Bermondsey Beer Mile is in central South East London. It stretches from Druid Street at Southwark Brewing opposite St Johns Estate, East to Jarrow Road at Fourpure Brewing Co.

Bermondsey Beer Mile tube stations - How do you get to the beer mile?

If you’re starting the Mile from Maltby Street Market end and heading west, London Bridge station is closest – it’s about a 10 minute walk to the first breweries on Druid Street. Bermondsey tube station is also nearby, taking around 15 minutes on foot to Druid Street from the west.

To do the Mile from east to west, starting with Fourpure Brewing Co, South Bermondsey railway station is a three-minute walk away. For the tube, Surrey Quays overground station is a 15-minute walk from Fourpure.

If you are thinking of doing the Bermondsey Beer MIle, then make sure you plan your day out ahead of time. The breweries all open at various times throughout the week, however none are open on Mondays and some are only open on the weekends. Therefore to get the best experience, and to visit as many breweries as possible it is advised to do the Beer Mile on a Saturday. If you want to skip a couple of breweries and skip the crowds too then Wednesdays or Thursdays could be good bet.

Again, the breweries all open at different times but most are open from midday through to 6/7PM, so plenty of time for drinking. Some opening a bit later from 5-10PM.

Please note that brewery opening times may vary. Before heading out, please double-check with the brewery directly for the most up-to-date opening times.