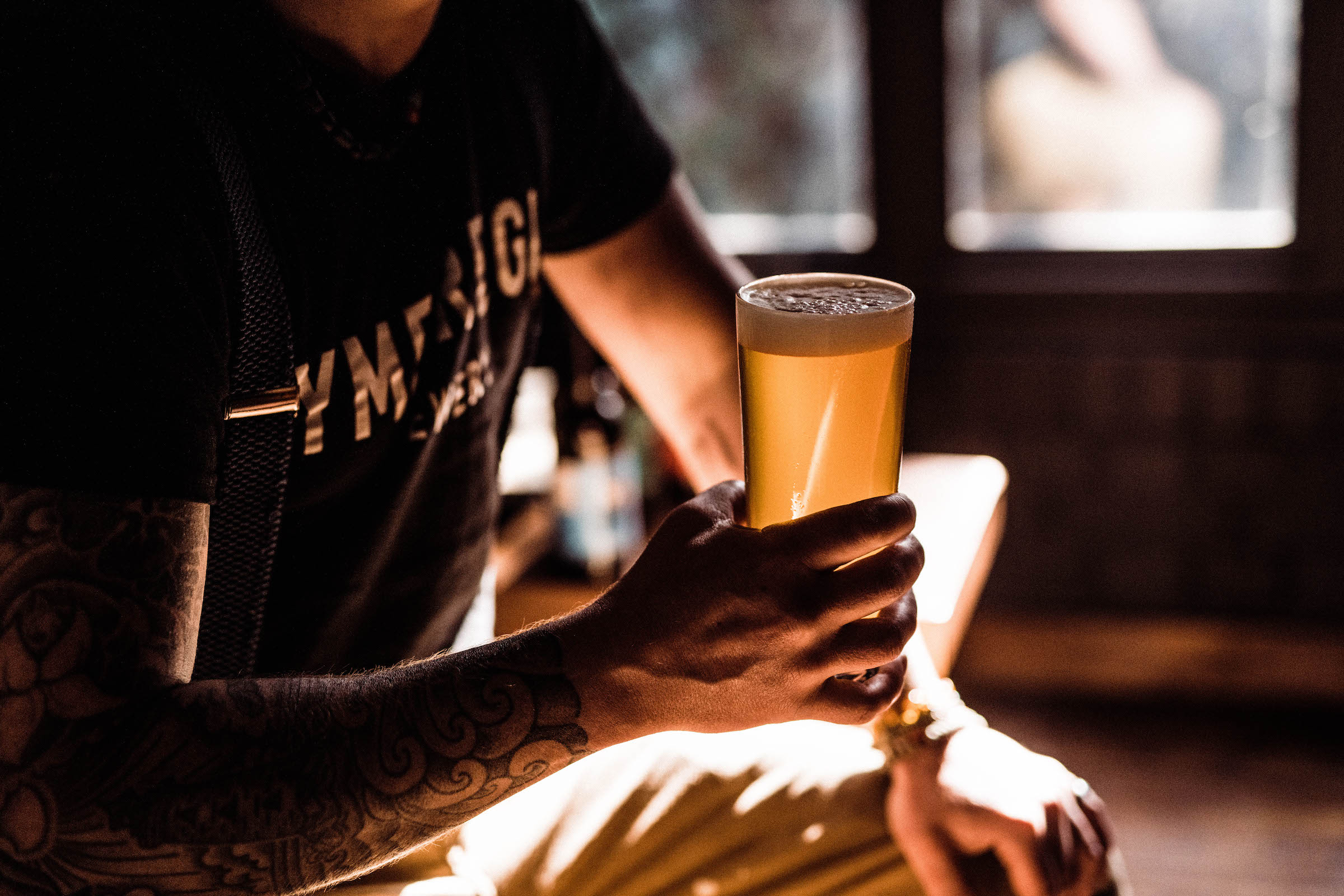 asting beer? Don’t we just drink beer, swill it around in the glass, look at it all too briefly and launch it into an open maw of a mouth, letting the amber-bright, bitter-sweet liquid rush down the throat like a torrent ready to drown any unsuspecting creature lurking in our gullet(I’m thinking Jonah and the whale here, rather than any reality obviously).

Well, you can do the downing-in-one thing without any shame, unless you spill it down your front as your mates watch with absorbing horror. I am also sure that there are many beers out there in the world designed to be just that kind of beer and some of them are not bad, especially when you want that well-deserved first pint — Pilsner Urquell, Schneider Weiss, any Franconian lager for starters.

On the other hand, you can taste the beer, let it zoom in on your senses, let it throw in many nuances, let your palate be caressed, warmed and warned, lose its restrains and generally indulge in the multitude of tastes that beer can provide.

So what do we do? Believe it or not, I get paid to judge beer, and believe it or not it can be a tough gig. It is not a fantasy of sitting there on the booze for several hours, while people serve you all manner of beers. It is about contemplation and examining the flavours that emerge when you take a sip (yes it’s all about the sips). It is about recognising when a beer is right (a harmonic collusion between the four main ingredients of beer: water, yeast, hops, malted barley), or alternatively when it’s riddled with more faults than San Andreas (for example diacetyl = butterscotch, buttery; oxidation = cardboard, papery). ‍

So what are we looking for when we taste beer? Malted barley brings a sweetness and a biscuity crunch, though it also brings a grainy dryness and depending on the way it has been kilned it can also bring chocolate, coffee and caramel. And also let’s not forget that it also effects the colour — the lighter the kilning the lighter the beer, which is why lager malt is essential for making a lagered beer, unless it is a Schwarzbier, Dunkel or Bock (lager is a family of beer styles rather than one generic product, but then you knew that I guess).

Water is the elusive ingredient, more of a puppet-master in the shades than a demagogue on the platform; the mineral rich water of Burton-upon-Trent is hard and sulphury, ideal for pale ales, which is what the town made its name with in the 19th century. Meanwhile on the other hand, the waters of Pilsen in the Czech Republic, are soft and virtually mineral free, making them ideal for the golden Pilsner, which changed the world of beer in 1842. Elsewhere, breweries add salts or remove them to make their water amenable for whatever beers they brew.

Without yeast, we would be left with a flat, horribly bitter, malty beverage lacking any alcohol, for it is the action of the yeast on the sugars of the hopped and boiled wort during fermentation that creates alcohol and carbon dioxide. With top- or warm-fermented beers (ales, stouts, porters), the yeast also creates esters, which can replicate fruity aromatics such as soft fruits or banana; these characters are muted and dialled down with bottom- or cold-fermented beers from the lager family, with only the aromatics and flavours of the hops and malt coming through. And of course let’s not forget wild yeast or Brettanomyces, which can produce earthy, barnyard, horse blanket, funky notes.

Finally, there is the hop, the climbing plant that sends many brewers and beer fans into rhapsodic delight, the rock star of the craft beer revolution, the ingredient that can produce aromas redolent of tropical fruit, citrus, freshly cut grass, mint, pine, resin and a general feel good sense.

Other members of the flavour constituency can be added ingredients such as coffee, fruit, chocolate, spices and herbs, while ageing beer in various barrels add another level of flavour.

When you smell and taste a beer, all these ingredients should be in a balance that is harmonious, integrated, pleasing and able to connect you to a world of beer that on the right day and right constellation in the sky makes it one of the most complex and delightful drinks in the world. Is it the IPA (in all its various guises, whether New England, milkshake, English, black, Belgian, sour) that appeals to your palate, or maybe the gentle breadiness of a Bavarian Helles that makes the first beer of the day such an accomplished creature of refreshment or could it be the tart, tangy sharp, quenching, occasionally fruity beer (lazily termed a ‘sour’) that has spent time in wood (maybe a barrel that once held red wine) and inoculated with wild yeast and lactobacillus? Whatever the beer, no matter the flavours you note, there is a whole wide world of beer out there waiting for you to taste.

If you would like to read more of this interesting article and more great content about beer and the South West brewery experience then purchase a copy of The Brewery Bible SW Edition.