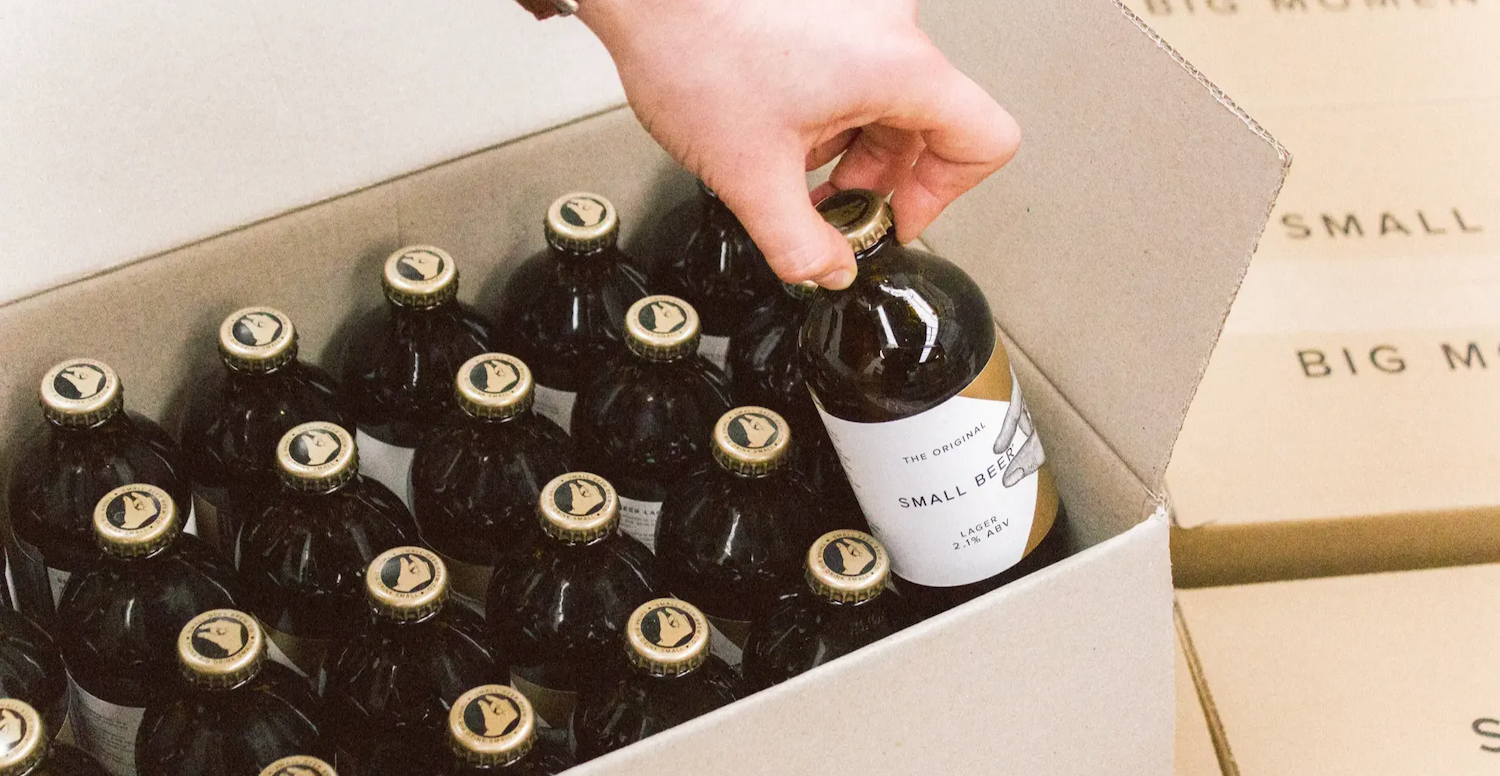 For many beer lovers, the prospect of Dry January can be daunting, but recent years have seen the flourishing sales of no and low alcohol beers.

Coined the ‘Nolo’ trend, since 2016 sales of no or low alcohol beer are up 30%, driven in part by 18-24 year olds and the shift towards healthier lifestyles.‍

The Annual British Craft Beer Report, published by the Society of Independent Brewers (SIBA), details that one in three young adults have cut down on their alcohol consumption, while a record 23% are now teetotal. With the increased appeal of mindful drinking, brands are developing beers which rival their higher-ABV equivalents in taste, aroma and body. This empowers consumers to cut down on their alcohol intake, without having to compromise on flavour.

The rise in ‘low & no’ alcohol beers

This burgeoning sector has steadily risen to compete with the popularity of craft beer, and shows no signs of wavering. Low and no-alcohol beers appeal to those who choose not to drink, want to reduce their consumption, or may need to drive.

Sales of low and no-alcohol drinks have surged in recent years. The British Beer & Pub Association has reported that between 2013 to 2018, sales of low-alcohol beer grew by 232% in the UK, with 4.8 million pints of no and low-alcohol sold during Dry January alone. This figure is set to be even higher in 2021. Growth has been impacted by the influx of new product development in the sector, with suppliers investing more and more in the taste of their products.

Low alcohol beers are finding increasing prominence in the award scene, from the World’s Best Pale No Alcohol category of the World Beer Awards to the low alcohol beers featuring for the first time in the 2020 Scottish Beer Awards. 2020 also saw the launch of the Imbibe No & Low Taste Awards, awarding brewers who are leading the way in the no and low-alcohol space.

There are many terms to describe beverages with low alcohol content. Two official labels in the UK include:

While we may refer to 0.05% ABV beers as “non-alcoholic”, under UK licensing law these drinks would be labelled as “alcohol-free”. Despite their name, these beers can contain a small percentage of alcohol.

Across Europe and in the USA, “alcohol-free” means anything under 0.5% ABV, so imported products may be labelled differently.

6.5 million people signed up to take part in Dry January 2021, an increase from 3.9 million in 2020. With the impacts of Covid-19, more people are reconsidering their relationship with alcohol after reports of increased drinking in the first UK Lockdown - in an Alcohol Change 2021 press report, 1 in 3 say they have drunk more in 2020 than 2019, and 1 in 5 have felt concerned about the amount they have been drinking since COVID-19 restrictions began.

Dry January participants often report saving money, gaining energy and experiencing improvements in sleep. Many also enjoy further lifestyle changes - research has found that six months after Dry January more than 70% of people who take on the month with Alcohol Change UK's support are still drinking more healthily. Contributing to boosted levels of wellbeing, the impact of reducing alcohol intake has proved to have long-term benefits.

Does a low ABV beer count as sticking to Dry January?

Yes, it can count! Studies show that consuming low-ABV beer cannot result in intoxication, and 0.05% ABV beers have a similar percentage to the alcohol found naturally in everyday food and drinks, from bananas to soy sauce. Even 0% ABV beers are likely to contain trace amounts of alcohol.

It is important to note that alcohol-free beer may be unsuitable for those who are pregnant, have certain health conditions or are recovering from alcoholism due to sensory cues.

Choosing the drinks you want to consume in January is a personal choice, and for many, low and no-alcohol beers provide a very achievable and sustainable alternative to no alcohol consumption during January.

Breweries across the UK, from the largest beer brands to artisan microbreweries, are getting involved in this exciting trend. Here are our top picks for low and no-alcohol beers sold in the UK.

Small Beer is the world’s first brewery to dedicate production to low-strength beer.

They use a process of ‘long lagering’ - while the industry standard is 4-6 days, Small Beer store their lager for a minimum of 6-12 weeks. This extended period allows the beers to develop pronounced flavour profiles. We were delighted by the flavours of their Original Lager - on the nose we get a good amount of citrus, with an appealingly crisp and dry finish.

We picked up one of these in Waitrose for less than £1.20 after seeing rave reviews online. It’s an alcohol-free stout. We were very impressed. Think of it as honeycomb covered in chocolate, because that’s exactly what it tastes like: rich, unctuous and an absolutely decadent treat of a beer with a mouthfeel that tricks you into thinking there’s definitely some alcohol in there.

Although the pale ale is too strong to be classified as “low-alcohol”, its ABV is almost half that of its Wiper & True full-strength counterparts, making it a great choice for a truly refreshing and light alternative - without compromising on taste.

We’ve picked this one for its divine aroma. Citrusy amarillo hops mingle with a lighter malt sweetness, and the extra body has a softness that takes the edge off carbonation. The beer is certainly reminiscent of standard full-strength ABV pale ales.

Adnams invested in a de-alcoholiser; a reverse osmosis plant which allows the team to brew Ghost Ship 4.5% and then take out the alcohol afterwards. It’s a little technical, but all you need to know is that this allows Ghost Ship to become almost free from alcohol, but retain its original flavours and aromas. So you’ll still get to experience that famous citrus kick and lemon and lime aromas, when occasion or preference dictates less alcohol.

With its strong notes of pine, citrus, and a hoppy bitterness, the flavour profile of Brewdog’s Nanny State is a testament to low-alcohol beer. Its rich russet colour is reminiscent of a traditional ale, setting the Nanny State apart from the lagers that seem to dominate the alcohol-free market. This quality ale, with next to no alcohol, is another fine example of Brewdog’s craft and innovation.

This beer is the low-alcohol version of fan favourite Harvey’s Old Ale, and it does not disappoint. Identical to its parent product, the alcohol is removed prior to bottling - the full-bodied ale has a magical aroma with touches of toffee, dried fruits and roast malt, making it a perfect choice for a low-alcohol winter warmer.

Made by the pioneering Chesire-based brewer Drynks Unlimited, this de-alcoholised lager has some well-rounded maltiness and bitterness to taste, with a subtle hint of citrus. Packed with so much flavour, you wouldn’t guess it’s alcohol-free.

This is a bit of a cheat one as although this business is based in the UK, they actually brew in Germany - but these guys are a pioneering brewery in the low-alcohol beer market, so we felt they had to be included. Rich, biscuity malts balance the lager’s citrus and hop finish. With a brewing heritage spanning over 400 years, the beer is left unfiltered for maximum flavour. ‍

This refreshing pale ale is celebrated by Ramsgate Brewery for its “bags of delicious citrus hops”, and we couldn't agree with the description more. This ale really packs a punch, with a perfect balance between bitterness and sweetness.

Described by Tiny Rebel as “a non-alcoholic party in a can”, with pineapples, mangos, crushed peaches and passionfruit, this IPA lives up to its title. Clwb Tropica appeals to lovers of fruity IPAs and non-alcoholic beer drinkers alike. For maximum freshness, serve it cold, and enjoy the vibrant citrus flavours on your palate .

This pilsner style lager is one of the best we’ve tried. Its balanced character has a superb floral aroma, with a touch of spice from the hops. We’re convinced that for many beer drinkers, this would even pass as a full-strength beer.

The 'low-down' on low and alcohol beer

Dry January provides the perfect opportunity to change your drinking habits and become invested in the array of no and low-alcohol beers increasingly available. With the sector set to expand, we anticipate more developments in this evolving industry.

Low in alcohol, and high in taste, these beers rival the real thing, and offer many a realistic alternative to complete sobriety. Combining full-strength beers with low-strength will help you cut down your alcohol intake and give you a clearer head in the morning. Drink what you enjoy, using this January especially as a time to try new low and no-alcohol alternatives - you may find that many of these beers are as, if not more, enjoyable and rewarding to drink.